Street food is rampant in Asia. It’s cheap, tasty, and unique. Until street food has been attempted, especially in Asia, a traveler can finally say they have experienced the true nature of a country’s food culture. Taiwan is one of those countries that has an amazing street food culture, where locals and tourists eat and drink to their hearts’ content.

Taiwan has a personal soft spot in my heart. Having lived there for a summer during a study abroad program in college and traveling there 3 more times to visit my boyfriend’s family, it’s a great place to live, eat, and play. The food is definitely unique and original. Here are some items that are a must try:

Rancid, pungent, and delicious are some of the most used adjectives when trying this dish for the first time. It’s something that is acquired and not everyone likes the idea of eating fermented tofu. It’s worth a try, at least once. Just follow your nose when picking a spot to try this dish, the stinkier the tofu, the better. 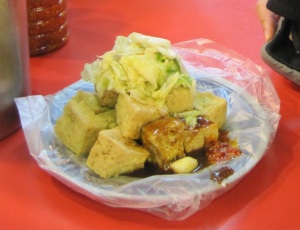 Classic and homey, you cannot go wrong with this dish. Try different variations of noodles, from the hand pulled to the knife shaved kind or get different cuts of beef. My personal favorite beef noodle soup has tendon and the grisly fatty pieces. Each variation will give you a new experience.

Oyster, egg, veggies, sweet potato starch, and brown sauce make this dish. It’s got quite a gelatinous and chewy texture, which takes some getting used to. At first, I did not like this dish, but after having it a few more times, it quickly became one of my favorites.

Basically fish cake in different sizes, textures, and colors that have been deep fried and then boiled and smothered in a brown sauce. This is a fishy dish and not one of my favorites, but it’s such a Taiwanese staple that so many love to eat.

One of my personal favorites, this is another great homey dish served with pig intestines, oyster, and vermicelli in a thick soup. It’s flavorful, slightly briny, and gooey but so good. Every time I go to a Taiwanese night market, I make sure I get a bowl of this soup.

Take a thick piece of giant toast, deep fry it, cut it open, and fill it with random stuff. That’s what coffin bread is.  My favorite ones are filled with pineapple or meat. 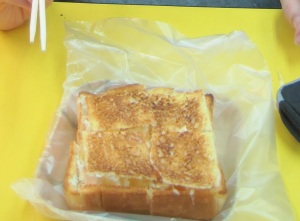 Similar to popcorn chicken, it’s a great little snack to eat while walking. The fried chicken is seasoned with salt and pepper. However, definitely get it spicy if given the option!  It’s so simple, but so damn good.

Wow. Pork belly braised in five spice and other spices until it turns into a tender, juicy, stew, served over a bowl of rice. It’s the perfect comfort food. Definitely eat this with a tea egg or a hard-boiled egg that’s been stewed in its pork juices. This is another perfect Taiwanese classic. 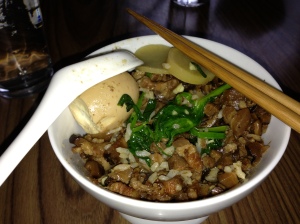 Commonly found throughout China, but the difference is that the Taiwanese ones are so much fluffier and can be customized with different fillings such as vegetables or cheese. The classic one is just with egg and some brown sauce. This is another great snack to eat while on the go.

These are a quintessential Taiwanese breakfast item. Basically a burrito with sticky rice instead of a tortilla, this makes a great meal in itself as it is very filling. I like getting the ones with purple rice, fried garlic, egg, and pickled veggies.  Sometimes I just let the chef pick, or making it easier, I just take everything in it.

Who doesn’t enjoy grilled sausage? Taiwanese sausage tends to be a little on the sweeter side, and less smoky than Western sausages. Typically served on a stick, the locals eat it with raw garlic on the side; one bite of sausage, one bite of garlic. Yum! 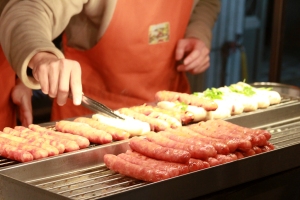 Invented in Taiwan, this drink has become a ubiquitous drink in most Asian restaurant. The original is just tea, milk, and tapioca balls. Try different flavors such as taro (my personal favorite), different types of teas, different levels of sugar, and different substitutes for tapioca such as grass jelly or aloe.

A Taiwanese hamburger, filled with meat and veggies on a small steamed bun. The main filling is,  you guessed it, pork! Salty from the meat, slightly sweet from the bun, and sour from the veggies, this is a flavor explosion in the mouth. 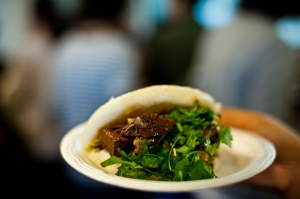 This staple actually hails from Shanghai where more commonly eaten. However, the Taiwanese do it differently by making it bigger and frying it on the top instead of the bottom. The buns are crispy on the outside and filled with a juicy pork filling. 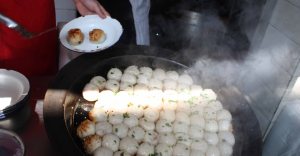 A mini, buttery pastry filled with soft candied pineapple, this little snack is one of the most popular items brought back for others to eat.

A giant gelatinous dumpling filled with meat and veggies. Similar consistency and texture to the oyster omelet, it’s actually more filling than what it seems.

You can smell this a mile away, especially when it’s freshly being baked in giant clay ovens. These buns are quite juicy to the bite and have a strong peppery taste. The best part about eating one is that it’s got a nice crunchy outside and a warm soft inside. 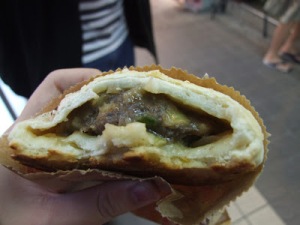 Big Star Fried Chicken is the most famous place to get giant fried chicken steak in Taipei. You will notice it by the size of the line. But don’t let the line deter you, it moves surprisingly fast as the employees have a efficient system going on. It’s definitely worth the wait, and while you’re waiting, you might as well order two of them.

Every Asian country has their own variation of shaved ice, and each claim that they have the best. Taiwanese shaved ice tends to be big, mostly fruit based, and not a lot of mixing of other random sweet stuff. Try something more traditionally Asian flavore d such as red bean or get a classic such as mango.

One response to “20 Must Try Taiwanese Street Food Items”