Vientiane is the sleepy capital of Laos. Compared to other SE Asian capitals, Vientiane is the slowest paced and least hectic of them all. Known as an international food mecca, there are many different types of cuisines, especially Lao food that is influenced by the French.

Most people say that Vientiane has nothing to really do there and a day is enough. A lot of people use it as a transit point for the rest of the country. I just decided on a 1.5 day trip here. It was definitely more than enough. In fact, I was so ready to get out of there after almost getting scammed on my last day. I also lost quite a bit of time after that incident from my sightseeing adventures, so could have done more than what is in this blog entry. 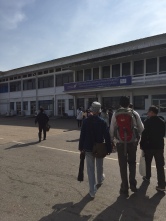 I flew on Laos Airlines from Luang Prabang to Vientiane. The flight between the two was really short. It was about a 45 minute flight. When we arrived at the domestic terminal, it was really tiny and underwhelming. I had to check my bag and waited at the conveyor belt. It was the oldest one that I’ve ever seen. It didn’t even go in a loop and was just a one-way conveyor belt from the baggage carriers to us. Luckily, people grabbed their bags quickly, otherwise we would have ended up with a bunch of bags piled up at the end.

From there, it was easy to get a taxi. The taxi stand was right outside with a flat rate of 57,000 Kip. Definitely more expensive than Luang Prabang, but the taxis were brand new Kias. The ride from the airport to my hostel was about 15 minutes.

Just like in Luang Prabang, there is a shortage of selection with hostels in Vientiane posted online at HostelWorld. This one was definitely an older hostel and probably the least favorite of all the places that I’ve been to so far on this trip. There’s also another hostel with the same owners, just across the street from one another. The other one is called Dream Home Hostel 2 and has a pool, but had poorer reviews so I decided to stay at Dream Home Hostel 1.

Here are the positives:

Not so great things:

After arriving in the city, I was hungry. I decided to open up my Lonely Planet and the first thing that caught my eye was this street vendor lady. She didn’t even have a restaurant name. I knew it was going to be good and it sure was.

I ordered a baguette with liver pate, veggies, cream cheese, and sweet chili sauce. I got a half sandwich for 11,000 Kip. There was another local eating there who ordered the same thing, so I knew I made the right choice. 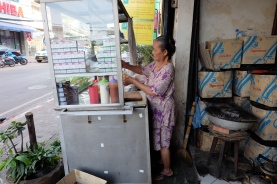 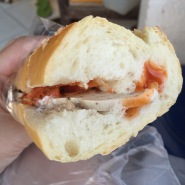 I was still slightly hungry, so I swung by this bakery on my way back to my hostel. This is the original in Laos and a popular bakery in Vientiane. There’s free Wi-Fi. I got a strawberry donut and decided to sit outside and slowly enjoy. There were tons of different Scandinavian pastries and breads to choose from. My donut was just so-so. It’s not very sweet, but the filling just didn’t taste fresh. It felt like artificial strawberry jam, and I was slightly disappointed considering I paid 8,000 Kip for it. 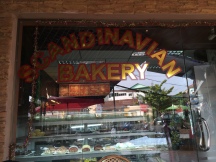 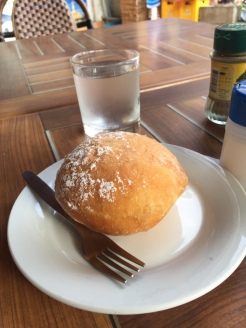 This night market was huge and was filled with a lot of locals. It was mostly shopping and very little food. All of the food vendors were outside of the main market on the side road.

I had walked around for a good while to find food and decided to stop at this little stand outside of a mini market. There was a street vendor with lots of locals eating at her place. I decided to get the Spicy Duck Larb and DAMN was it spicy. But it was so delicious that I finished the whole dish. There were also lots of locals sitting around, so I knew that I had made a good choice. 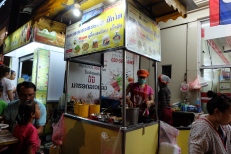 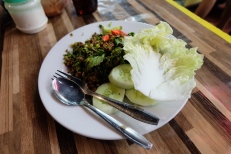 Afterwards, I got a Lotte at another street vendor, which is kind of like a roti pancake with bananas and condensed milk on top. I walked around for a little longer and then went back to my hostel. I was satisfied with my food for the evening.

This is a temple turned into a small museum. It’s believed to be Vientiane’s oldest temple. Inside was a giant temple with murals all over. The murals are pretty dilapidated. You cannot take pictures inside of the temple. 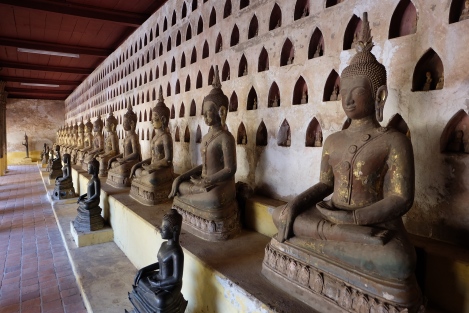 Around the perimeter of the temple are a bunch of Buddha statues of different sizes. Quite a few are decapitated. I learned that during the war, a lot of Buddha heads were removed because treasures were stored inside. It’s definitely a small exhibit and won’t take you anymore than 20-30 minutes to walk through everything.

This is Vientiane’s version of the Arc de Triomphe. It’s in the middle of a very busy roundabout in a commercial district. You can climb to the top to see spectacular views of the surrounding city. In front of Patuxai is a small yet well-groomed park. This was definitely a fun way to view the city and is pretty cheap, so I would recommend visiting here if you skip everything else in Vientiane. 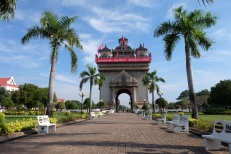 After a chunk of time was lost due to my almost being scammed (I’ll write about it in another post), I went back to my hostel and met up a friend that I had met in Luang Prabang. The two of us went walking around to get food and stopped at this market for some ice cream and cold drinks. It was definitely a European market with its nice wine selection, dry goods, and cheeses. It was nice to get a short break from the city and to sit in some air conditioning.

Shortly after our break, we decided to walk along the riverfront to catch the sunset. It was really nice and is along the same path of where the Night Market is located. The whole way, we were asked by ladies if we wanted pedicures, foot massages, or scrubs. We declined and just sat by the waterfront and enjoyed the view. It’s also great for people watching as it was a mix of locals and foreigners enjoying the views. In fact, we saw a Korean dance crew make a music video. Entertaining at the least! 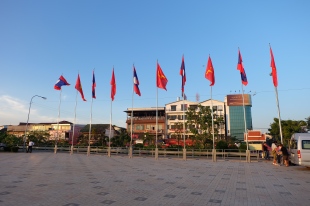 We wanted to get dinner afterwards and went to find this other night market. When we arrived, we were quite disappointed. It was really small and though only filled with food vendors, it was more or less the same things. It was grilled meats and pre-cooked veggies and curries. Nothing looked particularly different or special from the other street food we’ve already eaten. We looked around and decided to move on.

We ultimately walked here for our dinner using our Lonely Planet guide. We ordered a beef lahp and steamed vegetable dish with jeow. The atmosphere was nice, but only foreigners were sitting inside. The food was also a bit overpriced and I had definitely had better on the streets. The menu had always the regular choice and a “tourist choice”, which meant removing the “weird ingredients” and any spice. Unfortunately, this makes the food incredibly bland and boring. We told them to keep the food the normal way, but it was still not spicy and bland. Also between the two of us, our meal was 100,000 Kip, which was a lot more than what we could have gotten on the streets. Sorry Lonely Planet, you kind of failed us here on this one.

I didn’t do anything today as I had an 11:35 am flight on Vietnam Airlines. Just woke up, had breakfast and went to the airport. Going back was cheaper. Although I couldn’t get a taxi, I did get a tuk tuk for 50,000 Kip. They originally wanted to charge 60,000 Kip, but I paid 50,000 Kip instead. I still thought that was overpriced considering a taxi was the same cost.

Customs was really easy and didn’t take me very long to clear through. In fact, getting there too early (2 hours before), I couldn’t even enter the boarding area yet. I had to wait 30 minutes before they opened customs.

Overall, my personal experience in Vientiane was just one of disappointment. From getting almost scammed, to not a lot of things to do, to meh food experiences, I just had higher expectations. Many say that the food here is amazing and diverse. I definitely saw the variety, but I’d still have to say the best food was still on the street. Local food joints still never seem to fail and the ones catered strictly to Westerners were mostly dull. Would I give Vientiane another try? Maybe, if I was stuck here in transit, I would try and hit up some different sights, but probably not again.

One response to “1.5 Days in Vientiane, Laos”