Everyone knows that Dubai is a giant wealthy metropolis, full of glitz and capitalism. It may seem superficial and boring to most, just another big city to see with giant skyscrapers and ridiculous malls. However, I think Dubai has it’s charm. You have to know what to do and what to look for to get that more authentic experience. Here are some favorite things that made Dubai feel more like being in an authentic cultural hub:

Sounds like an obvious thing to do in any country, but believe it or not, it’s surprisingly hard to find authentic Emirati food in Dubai. Most Middle Eastern cuisine you will find there is from Lebanon, Iran, or Turkey. There are many potential reasons for this lack of local food. One is the large percentage of expats to locals, some figures estimate as high as 75% of expats. Another is that cooking as a profession is not deemed as something to be proud of, as much mentioned in this CNN article. The one I went to was called Milas in the Dubai Mall. Check out this Time Out article for a few of their favorite places.

Balaleet –  a sweet egg and vermicelli dish eaten for breakfast

The Bastakia Quarter is one of the remaining cultural heritage sites in Dubai, as most of the old buildings in the city have been removed for urbanization. It was nice just walking around alone, as there are many random side streets where I was the only one walking alone. Once you step out though, you feel like you’re in a tourist zone again. Most of the shops inside are artisan shops, selling wood work, paintings, and cloth.

3) Ride an Abra Across the River

This only cots 1 Durham, but it’s a cheap way to get across the river, and to ride a traditional mode of transportation. Although short, I thought it was fun experience to ride with locals and tourists. You jump in the boat as it’s still moving into the dock, hand the driver your money, and jump out as it is approaching the dock. The areas around the boats are extremely touristy though, as most tourists take this to the various souks like the Spice Souk. Docks can be found in the old part of Dubai either on the Deira side or Bur Dubai.

The Spice and Gold Souk are the most well known in Dubai, but there are many other ones throughout the old part of Dubai. If you just walk around, you will randomly run into a few. Although sometimes still busy with occasional groups of tourists and tourist shops, it’s generally less crowded and more local filled. 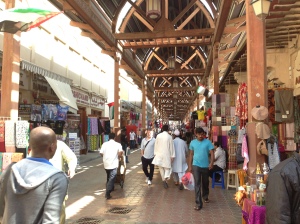 5) Go to the Arabian Desert

This is the best way to explore the landscape outside of the city. Unfortunately, the easiest way to do this is part of a Desert Safari tour, which gets really cheesy with the camel rides, outdoor dinner BBQ, and belly dancing shows. There’s ways to do it yourself, such as renting a 4 x 4 and just driving into the desert, but that requires a lot more coordination of logistics. 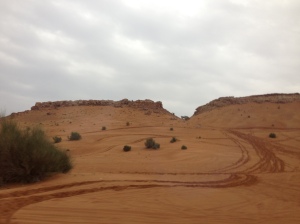 One response to “5 More Authentic Experiences in Dubai”