Continuing throughout my excursions in central Italy, I also went to San Gimignano. Known as the New York City of Tuscany, San Gimignano has some of the tallest and oldest medieval structures around. It was a charming Tuscan town, with some of the best gelato around.

Here are the buildings that are featured in Assassin’s Creed 2 that actually exist:

This is the plaza where all of these famous buildings are.

This is the church to the right side of the tower

It is the tallest tower to the left of the picture 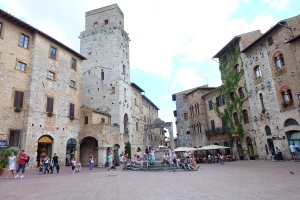 It is the tall tower in the center of the picture

These locations of other places in Tuscany do exist but I did not visit them because they are not in San Gimignano: