Manila is a hidden cultural gem underneath a blanket of chaos, crowds and pollution. This is my third time visiting the Philippines and, up to now, have only been in and around Metro Manila. One thing is for sure, it takes time and a whole lot local insight to appreciate it’s history, diversity and activities which the city has to offer the adventurous traveler.

Here are top 10 must-do in the city beyond the usual comforts of areas like Makati and Malate :

Old Downtown Manila is a cultural treasure trove. While just about every tourist goes on a stroll through the Spanish “walled city” of Intramuros, the former downtown area of Manila is actually formed by three other districts, namely: Quiapo, Binondo and Santa Cruz. Quiapo is the spiritual and commercial center for the vast majority of Manileños and there you can find the Black Nazarene statue believed to be miraculous by millions of Filipinos. Across the “Quezon Bridge” where locals buy native souvenirs, is the Muslim neighborhood centered around the Golden Mosque. You can try unique Southern Filipino dishes in this area, and it is safe. Meanwhile, Chinatown which straddles Ongpin Street, is split between Binondo and Santa Cruz districts, traditional home to the millions of Chinese-Filipinos since the Spanish times. You can find the Chinatown arch in front of the Santa Cruz Church and the street goes all the way to Binondo Church. Go there for dumplings, ube delicacies and vegetarian restaurants.

Skip Mall of Asia. Greenhills Shopping Center, just east of the Metro in Mandaluyong City, has more to offer than MOA in terms of bargains, souvenirs and other local finds. The shopping center has over 2,000 stores spread between 13 interconnected malls–some indoor, some outdoor. It’s virtually a large market, full of independent stores and bazaars with a flea-market atmosphere. With so many tiny alleys that are perfectly unnumbered, getting lost in the maze of boutique stores and “tiangge” is part of the experience. This is where locals and expats in-the-know go for bargain fashion, second-hand electronic gadgets and repairs. Give yourself at least 5 hours to cover ground and compare prices from stall to stall, and bargain at 50% the asking price. Hostel staff recommends arriving before 12 noon and leaving before 6pm, ahead of the closing time rush.

Named after the Philippines’  national hero martyred in the park by the Spanish, Rizal Park hosts plenty of free public events on weekends. Go there for a picnic around sunset and enjoy concert performances! 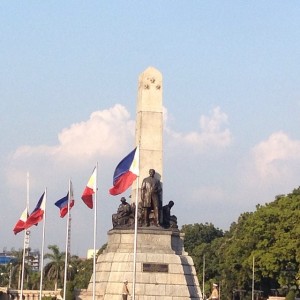 A Lonely Planet author was once quoted as saying that the massive graveyard compound, formed by three cemeteries on the north part of Manila City proper, is among his favorite unusual destinations in Metro Manila. The three separate cemeteries are Chinese Cemetery, the Cementerio del Norte, and the La Loma Catholic Cemetery. Each has its own distinct characteristics that are well-worth seeing, especially if you are keen on architecture, history and culture. The Chinese Cemetery right next door to my hostel represents the spiritual beliefs the Chinese-Filipino community have maintained over many centuries of presence in the Philippines. Not too long ago, before the Chinese Cemetery reached it’s capacity, you could witness funeral processions twice daily that include a full marching band, a float parade and hired mourners. The grandeur involved in the rituals are so uncommon that many mainland Chinese tourists used to come in buses just to witness and photograph the event. Today, you can hire a guide to walk you around for 300-500 pesos depending on time and get an explanation for the eccentricities of the local Chinese community. The city-run North Cemetery is known for the thousands of families that live within its confines. You can watch a documentary filmed about the community in there. Tours are informal and can be arranged by contacting the Red Carabao Hostel. 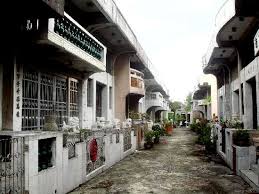 Awarded the Best Hostel in the Philippines in 2014 by Hostelworld.com, Red Carabao is Manila‘s only off-the-beaten-path option for backpackers. They offer avid travelers more than just a dorm bed for cheap. It can best be described as a “community of travelers” more than your standard-stock hostel. Every guest is treated like a friend, facilities are shared, and atmosphere is very communal. The hostel makes it clear that it is not suited for every backpacker as it is really ideal only to travelers who appreciate experiencing local life, meeting people and are accustomed to social, friendly settings. Their “3 activities a week guarantee” is ideal if you’re looking to do something different as they put on activities from pub crawls, volunteering, morning yoga, host family cooking to even rowing on Manila’s River. I have stayed there 3 times over the years and have seen it evolve from one floor into four! The staff there can guide you to everything listed here, so be sure to check them out if this interests you. They prefer guests book directly or just walk-in, if you want lower rates and better rooms. 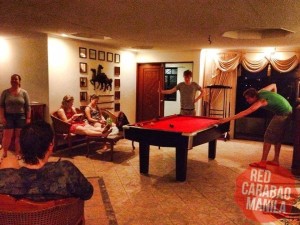 No day around Manila’s Old Downtown should end without a visit at Bayleaf Hotel’s rooftop bar, Sky Deck. It has the most stunning views of the city, relaxed, dressed-down ambiance and quality Filipino food. Go there for sunset! 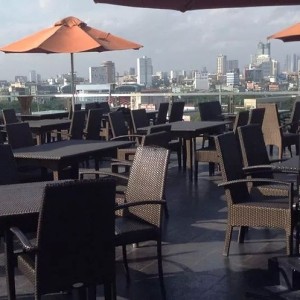 Not your typical tour,  Carlos Celdran’s walking tours are more of street performance. When he takes you through downtown Manila, expect more emotional story-telling than historical dates and information. He uses props throughout the tour to create a thematic experience. Although the tour is pricey, at 1300 PHP a person, it includes Halo Halo, a horse carriage ride, and a poster at the end. Definitely a worthy experience!

8) 1951 Bar in Malate – Drink Apparently a favorite hang-out of twentysomething expats in Manila, TheBar @ 1951 is a remnant from Malate’s Bohemian days. It’s a safe go-to spot for weekday drinks and live music in Malate’s otherwise seedier side.

From the Collective (Malugay Street, Makati City) site: “An off-the-beaten path type of community housing artists, entrepreneurs, and free-spirits alike. A very bohemian vibe with art spaces, quaint cafes, various food choices, unique boutiques, an alternative rock scene for emerging bands, and so much more! Not your typical hangout in the bustling metropolis that is Makati.” Reggae Nights on Sundays pick up around 10pm. 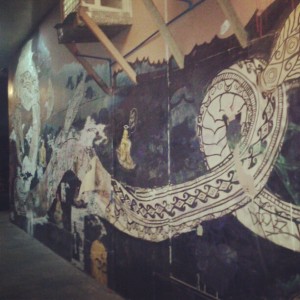 Cubao Expo is a hang-out area in east Metro Manila, about 15 minutes from Greenhills Shopping Center. This is where you can find about a dozen independent stores from vintage clothing, old books and LP records. There are four bars there for chilling out, the famous of which is the communist-themed Fred’s Revolucion Bar, which serves bevs at worker’s prices! 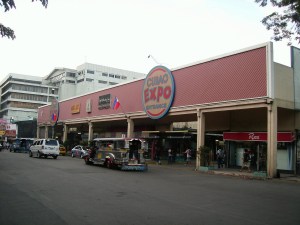