I love Assassin’s Creed 2, so when touring through Florence, I decided that I wanted to check out all of the sights that are featured on the map. This was a bit of a challenge to dig through information on the video game and to determine which were real vs. fictional. However, here is my Florence, Ezio Auditore tour:

1. Mercato Vecchio – Loggia of the Porcellino

Located not too far from Palazzo Vecchio, it’s now a market full of souvenir stands. Despite it’s turn into a tourist market, walking around it is still quite amazing with it’s high arches and statues. At one end, you can find a boar statue called Porcellino. People put a coin into the boar’s mouth and let it fall through the grate below for good luck. Then they rub the boar’s snout to ensure a return to Florence.

Located right by the Firenze – Santa Maria Novella train station, this church is hard to miss. The backside facing the train station is not very impressive, but if you walk around to the front of the church, you will see the beautiful white and green marble facade. The church costs 5 €. No discounts and cash only. Also, be sure to wear clothing that covers your shoulders, otherwise you will have to pay another 1 € for a cover. 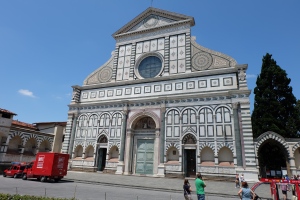 This church has an interesting history with the front facade never being completed. When entering the church though, it costs 4.5 € and you cannot take any pictures. Really lame. The inside though is almost a perfect copy of one of the missions that Ezio completes in the game. However, some of the items in real life are much smaller. Also, most of the Medici family is buried here.

Another church, another 6 €. This one has some of the most famous characters in the game buried here and from Italian history. Machiavelli, Michelangelo, and Galileo are the most well known.

Unfortunately, this place is completely under construction until 2016. You can still walk up to it and go in for 2 €, but none of the exhibits are available within this museum. However, the museum does feature it’s history as a safe place for mothers to leave their unwanted babies.

Palace turned into art museum. It’s still quite interesting to go in. The place costs 4 € with a student ID. The palace itself is quite beautiful, with chandeliers and frescoes in most rooms.

Also known as the Duomo, this church is an architectural marvel. Every time I walked by this church, I was always in sheer awe and wonder at how amazingly beautiful and grandiose this place is. It’s definitely best to come at night and at day to get views of the church from the outside and to walk around. Additionally, the church is free, but all the other sights such as the dome, baptistery, bell tower, and church basement cost 10 €. Lines can be ridiculously long in the summer months, so if you don’t want to wait hours (the church interior is not that worth it), then just do the bell tower and the dome. As you climb up the dome, you get to see most of the church anyway.

This bell tower is really awesome and totally worth it to climb. It’s a lot of steps though, and if you are claustrophobic, it can get tight with tourists going up and down on the same stairwells. To get your 10 € tickets for the 4 sights around the Duomo, you actually purchase those tickets at this bell tower. The line is generally a little shorter here, but again, check the times and either go early, or wait until later in the day to go.

This area is right next to the clock tower at Palazzo Vecchio. Underneath houses several important statues. Around the corner in front of the clock tower is a free and identical replica of Michelangelo’s David.

Also known as Palazzo Vecchio (Palazzo Della Signora is the old name of this place). This area is the giant square surrounding. If you remember in Assassin’s Creed, this is where Ezio’s family gets executed and where he has to climb to the top of the clock tower prison. You can climb to the top of the clock tower as well. It costs about 8 € with a student ID for just the tower, 10 € regular price. If you combine with the museum, it rises to 12 € and 14 € respectively. It’s quite pricey, but considering it gives you a great view of the city and that not many tourists do this, it was worth it. I was one of the only ones up at the top of the tower when it opened at 9 am.

The last church on this list, this one is free to go in. It is also the smallest church and the least impressive of the ones on this list. However, it is conveniently located around the other sites such as on your way between Palazzo Vecchio and Ponte Vecchio, so you might as well quickly stop in for a look. 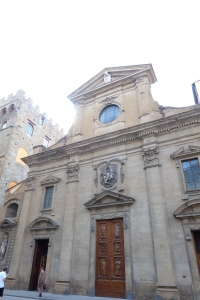 One of Florence’s most well known bridges, now filled with tourists and jewelry stores. This bridge was one of the few that was not destroyed during WWII by the Nazis. Also, this bridge is where Ezio has his very beginning scene, where he develops the scar on his face. 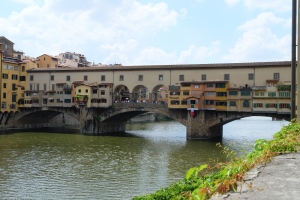 A grand palace created by the Pitti family, it was eventually bought and taken over by the ruling Medici. The palace was one of the more expensive sites, where each portion of the palace cost anywhere from 7-8.50. You can buy a combined ticket for a cheaper price. Most people elect to visit the gardens and the Royal Apartments. More details can be found here. 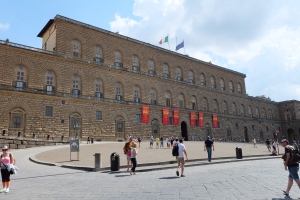 The remaining landmarks in Florence are unfortunately fabricated just for the game. These include: